I want to start my first post on this blog by expressing our opinion on ICOs – this topic consumes a lot of attention and capital so i want to discuss it by looking at its fundamentals.

If you are not familiar with the term ICO, it is a crowdfunding method(initial coin offering) which attracts capital by selling some kind of tokens for ETH, BTC, fiat or other cryptocurrency. Majority of ICOs are funding companies that are in seed or idea stage. Some ICOs are funding already running businesses, but the vast majority are developing something completely new, innovative and they have barely begun.

For an average user it is confusing and difficult to differentiate between ICOs and cryptocurrencies and media sometimes represent it as the same thing.

Actually ICOs at the moment account for about 1.64% of the whole cryptocurrency market – they are a small part of this industry.

They have raised over 3 billion dollars till October. 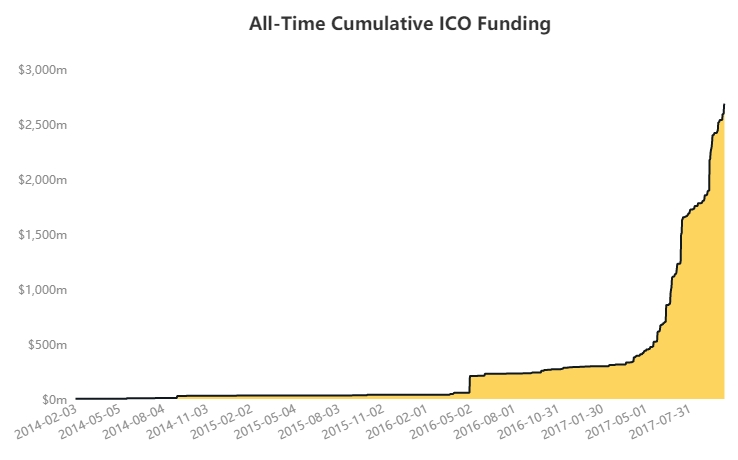 Their functionality differs between various sectors.

The whole dynamic of an ICO project is almost identical to seed stage startups – this allows us to look at startup industry and use some historical data to create an opinion and compare them.

As you can see these are significant differences.

If startups have over 50% failure rate after careful reviews by more proficient investors in a more experienced and sophisticated market – majority of funded ICO projects are guaranteed to fail.

Neither myself, nor Kaiserex did not invest in any ICO(except for DAO project), but we still outperformed the cryptocurrency market( for the last two years by about 2X with less risk than the whole crypto market. This means that an intelligent investor does not need to invest in ICOs to have a great ROI.

In 2017 June – 93% of all ICOs have hit their funding goals and last month only 34% are hitting their targets. This means that investors are getting more cautious and refusing to invest in anything they are offered.

Since the typical ICO investor is not a professional investor – companies doing ICOs adapted to that. Even well-known businesses started creating ridiculous investment proposals, because anything gets funded. For example Bitwala, a reputable German company with a successful crypto business is doing an ICO soon. I got their ICO proposal and after reading the whitepaper i could not find any details on how the token economy works and why should my investment increase in value, so i wrote them an email: 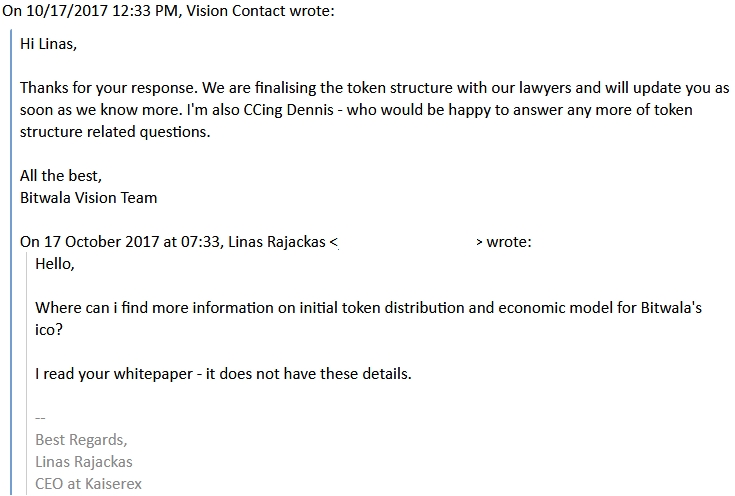 Their answer shows that they started asking for money from investors, before even deciding on how exactly their token economy will work and this comes from a trustworthy and reputable company in the crypto market.

Since 2014 I have read over 300 whitepapers looking for details how a cryptocurrency/token works and tried to understand why the value should increase or decrease. Only about 5% of ICO projects even mention something about their economic model and almost always you have to contact them directly to find out specific details which are crucial.

Media is constantly talking about ICOs and their success. The most popular success criteria is how much money they raised. This week i was in a local crypto conference in Vilnius and Monetha’s founder Justinas was on a discussion panel bragging about how they raised more money than Ethereum’s ICO and how successful they are. Why would anyone think that the amount you raise has any connection to the success of your project? This is equivalent to saying:  “my bank trusted me with a huge loan therefore my business is a success“. Such statements simply lack any reason or logic.

From my experience the only truly successful ICO i know is Ethereum – others will have to pass the test of time and prove themselves by building a decent user/client base.

Should you ignore ICOs?

ICO is an important part of crypto market which is usually uninvestable in ICO stage, but buying a token at a later stage can be a profitable venture.

I did not invest in Ethereum’s ICO, because i thought that it lacked infrastructure and proper user base, but followed the project and as soon as i was confident about their user base and proper development bought in at $0.80 in 2015 December, which proved to be a very successful investment. Ethereum’s ICO price in 2014 July was around $0.3, when it started trading on exchanges in 2015 August, price was around $2.80. The result is obvious, not participating in 2014 ICO, and investing 18 months later when the project was properly developed gave a significantly better risk/reward ratio than investing at the seed stage. Many ICOs do not even reach their initial price after launching and only go down. Once the failures start happening and stricter regulation applies, market forces will adjust the pricing accordingly and buying truly developed projects with users will be a great opportunity.

In Philip A. Fisher’s book “Common stocks and uncommon profits”, chapter 5 “When to Buy?” he wrote about growth companies wanting to innovate and rough competition appearing from retail investors overpricing the stock when a company announces that they are going for innovation. He emphasized that the innovation itself has significant costs and takes a lot of time to create profits for investors like a car going 10mph on a curvy road, on the over hand once the innovating is done and a product is built it is equal to going 100mph on a highway. This is applicable to the ICO market as well.